The thirsty crow vs the frozen water

Walking down the allotments in the winter following a heavy snowfall is well worth the effort.

Not only is it so very quiet and peacful, but also allows me to see the animal track and get a better idea just how many visitors we get.

This Christmas saw quite a bit of activity - mostly fox, but there were also deer tracks, birds and (reported by one member) a rodent of some sort.

There were no rabbit tracks thank goodness!

It never ceases to amaze me how clever some birds are.

In amongst the snow and ice on the bottom plots, a large black crow was desperate for a drink - all the water tanks and butts were frozen over, but a empty plastic tub on one plot obviously had thinner ice than the others.  I watched with amusement as the crow, using an empty yacult tub in his beak, battered the ice on the tub until it cracked.  He then lifted a broken portion of the ice out and drank from the exposed water - oh for a camera! 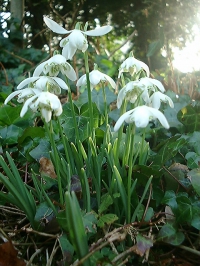